Non-ferrous metals, especially copper and copper-containing compounds such as bronze or brass, react very sensitively to acidic components in lubricants and solvents.

Sulfur compounds can often be a reason for increased copper attack. However, the absolute content of sulfur, which can be determined e.g. by ICP, does not allow any statement about the expected corrosion of metallic or copper-containing components. To reduce the corrosion tendency with respect to copper-containing components, so-called corrosion inhibitors or copper deactivators can be added to lubricants as additives. These are primarily intended to buffer and neutralize the species of sulfur compounds that could cause problems.

Proof of passing a copper corrosion test is a requirement in very many higher-level lubricant standards, such as for HLP hydraulic, TDL turbine or CLP gear oils. The "copper stripe test" (oils: DIN EN ISO 2160, ASTM D 130, greases: DIN 51811) is used to prove the extent to which lubricating oils and greases have a corrosive effect on copper.

For testing, a previously ground, polished and degreased copper strip is completely immersed in a sample vessel containing the lubricant to be tested. When testing greases, the copper strip is coated on all sides with the grease and then inserted into a sample vessel containing the same grease. The sealed sample bottle is then immersed in a heat bath (usually 100°C) for a defined time (usually 2 -3 hours). At the end of the test period, the copper strip is removed, cleaned with solvent and carefully dried.

After completion of the test, the discoloration of the copper strip is determined by comparison with a color scale and given as the degree of corrosion.

The result is given in four main categories (1-4) and within these in subcategories (a-e).

Typical test conditions are, for example, for: 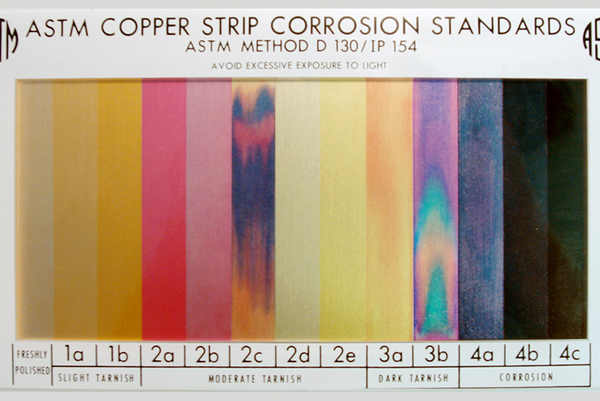