During the oxidation and ageing of oils subject to heavy demands or which are in use for several years, insoluble polar constituents are formed. Interface tension can detect these in the oil. In this way, it provides information on the ageing and remaining useful life of the oil.

In order to determine this with the Lauda TD 3 tensiometer, a testing cylinder is filled with 20 ml each of distilled water and the transformer oil to be tested. Due to the differences in density, two phases are rapidly formed, with the heavier water forming the lower phase and the insulating oil floating above. Fresh transformer oil is non-polar. Polar components have formed in the used oil, which accumulate in the region of the barrier layer of water (polar) and oil (non-polar). The interface tension of the water/oil phases is influenced by the interaction of the ageing products with the water. The Lecomte Du Noüy ring, secured by a thread to a scale, is lowered into the water-oil mixture. By lowering the cylinder, the ring is first drawn through the water and then through the interface into the oil. The force occurring during phase change at the interface is measured.

The interface tension is specified in mN/m in the laboratory report. If its value has fallen sharply by comparison with fresh oil or the previous sample, then ageing of the oil has occurred. The engineer will then recommend appropriate diagnostic countermeasures, such as regeneration or an oil change. 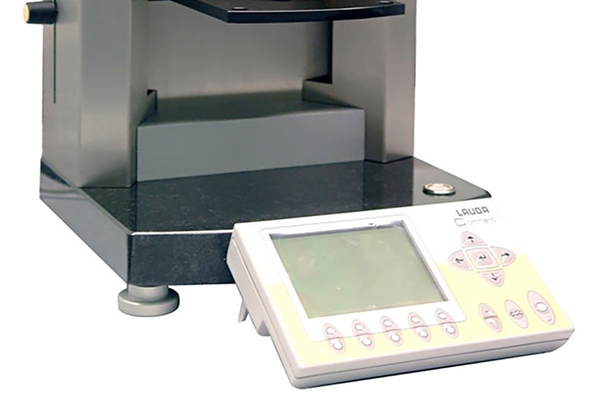