In turbines and large oil circulation systems, oil fillings of several thousand liters are usually in use for years. During this time, aging products may form or contaminants may enter the system that cannot be simulated during oil development. Without careful monitoring through trend analysis, sticky reaction products or sludge-forming soft impurities go undetected. Varnish-like deposits may reduce the oil flow at control valves and plain bearings, and oil sludge settles in oil-bearing lines and tanks. The reliable functioning of the entire circulation system is threatened. With the new MPC test (Membrane Patch Colorimetry), OELCHECK now also detects this risk. 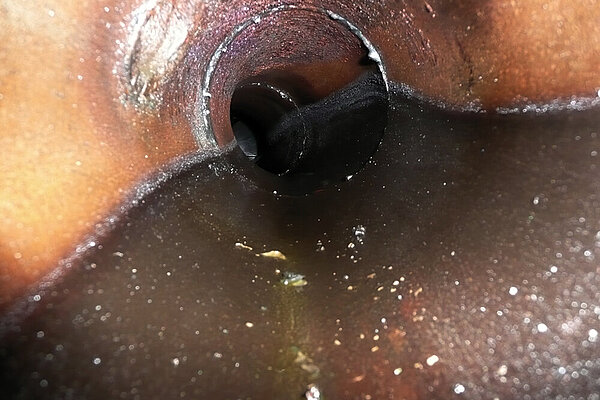 All values are an indication that increasingly soft particles, mostly of higher molecular weight, are suspended in the oil. When they conglomerate with each other, they easily form deposits on all oil-wetted components in the system. Thus, they can stick together valves and complicate the oil-based control of the turbine. However, the deposits can also cause damage in the filters. Not only is it necessary to change the relatively expensive, fine filter cartridges frequently. Often the impurities are also the reason for electrostatic charging. The following discharge (ESD) causes sparking and local burning of the filter material. Because of the holes caused in the process, the filter loses its effectiveness.

Until now, it has not been possible to predict the risk of deposit formation based on standard tests alone. For several years, the QSA test has been experimented with in the U.S., where a spectrometer is used in an in-house test of an oil laboratory to evaluate filter discoloration. The interpretation of QSA values is very subjective.

OELCHECK therefore began working on the development of an independent standard years ago as a member of an ASTM turbine oil working group. This has the aim to objectively display a forecast of the further available oil application time. OELCHECK is currently the only European service laboratory to offer the MPC test as an additional special test. This test is the only examination method in the world that not only detects the problem-causing insoluble oil residues, but also quantitatively evaluates them.

The MPC test is particularly recommended:

ASTM (American Society for Testing and Materials), which is comparable to DIN, has submitted a draft standard for the MPC test. The ASTM standard does not yet specify how the results or the measured value should be presented.

Obviously, each MPC lab report includes an image of the membrane under study. In addition, the course of the L-value and the a- and b-values in the color spectrum are mapped. Trend monitoring of color values can be used, for example, to assess the effectiveness of a filtration method in removing specific contaminants. For example, if an electrostatic filter method removes mainly the polar oxidation particles, the b-value becomes lower, but the L-value and the a-value do not improve. Additional measures may then become necessary.

In colorimetric evaluation with the i-Lab device, the residues on the membrane are analyzed with a spectral sensor. A light source consisting of three LEDs in the device emits light in the spectral range onto the membrane, with the deposits absorbing or reflecting all or part of the light. A detector measures the intensity of the "reflected" light at different light wave ranges, and the electronics evaluate the difference between transmitted and reflected light. The differences in reflection and color intensity at the respective spectral ranges allow the calculation of an MPC factor. The level of this factor is directly related to the potential of the oil to form deposits.

The MPC test is more time-consuming and personnel-intensive to perform than other test procedures. The sample can be examined at the earliest the day after its receipt in the OELCHECK laboratory, because the conglomerates often form only in the unshaken, cooled sample. Despite all the aids, filtration requires an experienced laboratory technician, because the conglomerates should not be destroyed.