The Soxhlet extractor takes its name from Professor Franz von Soxhlet (1848–1926), who originally used it to determine the fat content of dried foods. However, with only minor modifications the apparatus he developed also does an excellent job of separating the base oil and thickener of a lubricating grease.

Lubricating greases usually consist of 70 to 90% oil The rest is a thickener based on a metallic soap such as a lithium, calcium, barium, aluminium or other soap, which acts like a sponge that holds the oil. After the oil has been separated from the soap, it is possible to draw conclusions about more than just the oil and thickener components of the grease. Separation into solids and oil also enables a thorough analysis of the type of base oil used, including its composition (mineral or synthetic), viscosity (high or low), and additive content (EP additives, antioxidants and corrosion inhibitors).

A solvent such as n-pentane is used to extract the base oil from the fresh or used grease. It is poured into a round-bottomed flask. The Soxhlet extractor with the extraction thimble is placed on top of the flask. The thimble is made from latex to prevent entrainment of the entire specimen. This latex thimble acts as a membrane through which the base oil and the solvent can diffuse, while the solid components remain behind. A water-cooled reflux condenser is located above the Soxhlet extractor.

The solvent is heated to boiling point in the flask. The vapour rises up to the reflux condenser, where it condenses. The liquid solvent drips back down into the Soxhlet extractor containing the grease specimen. The solvent passes through the latex thimble and thins the soluble components present in the grease to the point that they separate and are able to diffuse through the latex. When the extractor is full, the mixture of solvent and oil flows through an external siphon back into the round-bottomed flask. This process is repeated several times in order to extract as much oil as possible from the grease. Only the solvent is vaporised in this process; the already extracted oil remains in the flask due to its higher boiling point. This means that only pure solvent reaches the grease specimen each time.

After completion of the extraction process, only the thickener or the soap structure of the grease or solid lubricant, such as graphite or MoS2, is left in the latex Soxhlet thimble. The solid component of lubricating pastes can also be analysed. The round-bottomed flask contains the solvent and the dissolved base oil. The solvent is distilled off. What remains is the base oil used to produce the lubricating grease, including its oil-soluble additives, adhesion enhancers and other oil-like additives.

OELCHECK offers Soxhlet extraction as an individual test. The required amount of grease is approximately 5 g. For damage analyses, it is advisable to compare the used grease with the fresh grease because the analysable contaminants and wear particles also remain in the latex thimble when the used grease is processed. 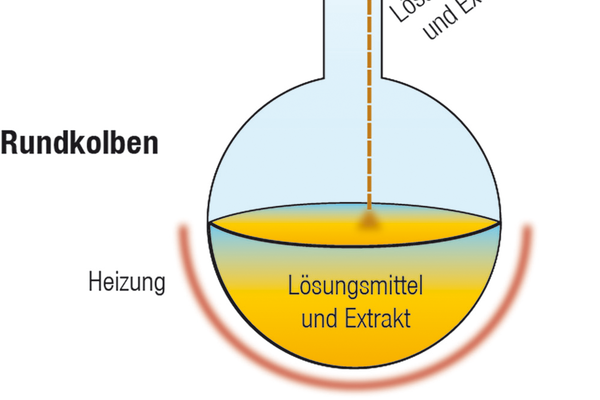