Lubricating greases are not homogeneous mixtures like oils. They consist essentially (up to approx. 90%) of oil, a few percent of additives and (up to approx. 30%) of a so-called thickener. This acts similar to a sponge. The oil, which is sometimes relatively low in viscosity (often ISO VG 68 to ISO VG 220), is retained in the pores of the thickener, which is usually based on a metal soap (lithium, calcium, aluminum, sodium). During transport and storage, however, the oil must not escape from the "grease framework". It should only be released gradually at the lubrication point, e.g. in a rolling bearing, under movement or temperature. This process of oil release is also known as "bleeding".

The method of "Determination of oil separation of lubricating greases under static conditions" according to DIN 51817 indicates the tendency of the corresponding grease to oil separation under storage conditions. However, it has only a limited ability to provide indications of oil release in the bearing position or in central lubrication systems. The method is also not suitable for fluid greases, such as those frequently used in gear engines.

For the determination, approx. 50 grams of the grease to be tested are spread homogeneously into a cylindrical test specimen, the bottom of which forms a  tapered woven wire screen bottom with a mesh size of 63 μm. The screen is weighed together with the grease. The whole is then placed in an oil collection container. A weight is placed centrally on the sample surface to increase the pressure within the grease sample. At a constant temperature (test temperatures from 40 °C to 120 °C are possible according to the standard), oil separates from the thickener, depending on the type of grease, but also on the precision of the manufacturing process It runs through the screen and drips into the collecting vessel at its lowest point. After 18 hours (short test) or 168 hours (normal test), the amount of oil deposited in the collecting vessel at the test temperature is balanced. The result is given in % (m/m) relative to the grease weight.

The higher the oil separation, which is limited upwards in some grease standards (e.g. wheelset bearing greases acc. to EN 12081 max. 6%), the greater the risk of oil floating up or separating in the container during transport of the grease from the manufacturer to the end user. The oil required for lubrication is thus no longer available. However, it is not recommended that separated oil be mixed back into the grease by hand. It would separate again after a very short time and then quickly run out of the bearing position. 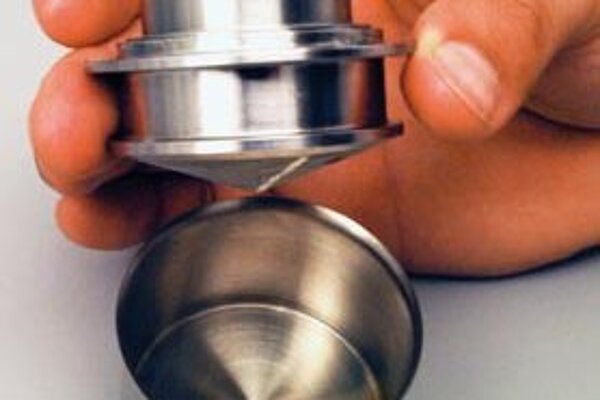