Particle counter at the OELCHECK laboratory

Almost 80% of all hydraulic failure can be traced back to impure oil. In order to lubricate other components, which are produced with an increasing level of precision, the purity and cleanliness of oil is of increasing importance. In order to better predict how much longer oil can be used for, the particle count of over 600 oil samples is carried out in the OELCHECK laboratory on a daily basis. The four counting systems, which are equipped with specimen change-over facilities, often run at full capacity, which is why we have installed an additional innovative particle counter. It has not just made the work of the laboratory technicians easier, but has also sped up work flow.

Impurities in oil can always be a risk. Hard particles such as dust, coloured particles and wear metals can cause abrasive wear. Soft particles can build up from old additive components. Often they are adhesive too and stick to machine parts or filters, which prevent them from functioning smoothly. Particles in oil accelerate the ageing of oil and shorten its lifespan. 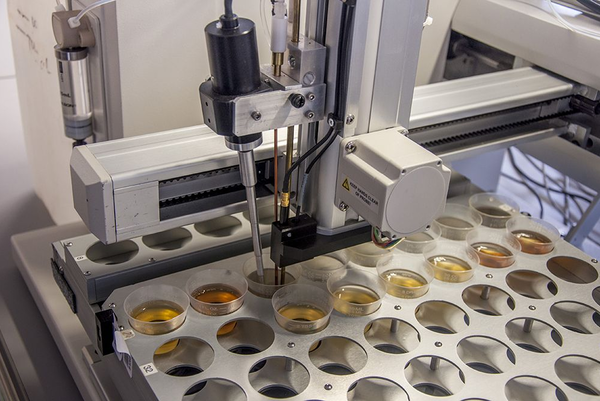 Particularly when checking hydraulic, turbine and other low-viscosity oils, the pollution level is determined based on ISO 4406 by counting the size and number of particles in the laboratory with help from automatic particle counters (APC). The level of pollution is divided up into purity categories. Here, laser sensors are used to determine the number and size of the particles. After the particles are counted, the oil is classified according to purity. The processes used to determine oil purity and purity categories are defined under ISO 4406 and SAE 4059. ISO 4406 classification is based on particle sizes >4 µm, >6 µm and >14 µm. The ISO particle numbers are cumulative, which means that the stated particle figure for > 6 µm consists of all particles >6 µm plus particles >14 µm.

Detailed information about purity categories can be found in the ÖlChecker Summer 2000. Conventional particle counting only distinguishes between the size and number of particles, however. It does not record whether they are soft or hard particles. Water droplets, small air bubbles and soft particles are thus recorded too. OPA, optical particle analysis, provides more precise information on gear oils. It also photographs the outline of particles and divides them into specific categories such as wear fatigue, cutting wear, non-metal impurities (tribopolymers), water droplets and so on. The number and size of particles are recorded during the particle counting process too.

In principle, the new generation particle counter in the OELCHECK laboratory works like existing devices with a laser sensor, but the samples are now homogenised and prepared better. The entire process has been simplified and optimised. In the conventional particle counting process, air bubbles and water droplets can influence the results. The new device rules out this possibility in the majority of cases.

Particle counting is one of the first stages of analysis an oil sample undergoes. Previous machines analysed the sample directly from the original container. As counting can take up to 5 minutes, this may lead to delays further along the testing process, because too many samples get backed up as they wait to be counted. Now laboratory assistants pour only 20 ml approximately of the homogenised sample into a plastic beaker, which goes into the new counter. Afterwards the sample container is immediately transferred to the next examination stage, which of course reduces processing times. Instead of only 20 samples, the new device can be loaded with 80 sample containers. Before the actual counting, an innovative ultrasound sensor determines the exact size of the sample so that an exact solvent mixture of 75% toluene and 25% propanol at a ratio of 2:1 (based on ASTM D7647-10) can be used and this can be taken into account to determine a blind value. Immediately before the measurement, the sample is homogenised and degassed. Air bubbles escape quickly from the diluted sample and can therefore no longer be counted in the analysis. The effect of the propanol in the solvent mixture is that possible water droplets dissolve and become „invisible“. In addition, the toluene dissolves any soft reaction products which may be present and ensures that only the hard particles which are actually present in the oil are counted.

The entire diluted sample of around 30 ml is then counted three times in a row, from which a mean average is extrapolated. If the individual values differ from each other greatly, the particle counter rejects the whole analysis and requests a new specimen. It doesn‘t get much more precise than that!

A Canadian company is behind our new particle counter. The core of the machine, the particle sensor, comes from Markus Klotz GmbH. In the OELCHECK laboratory, the innovative particle counter has already proven itself to be highly effective. Each day it looks at some 250 samples and is set to be joined by a second device of the same make soon.