OELCHECK now determines the relative humidity of oils at defined temperatures and also creates water saturation curves! This provides additional valuable information for proactive maintenance. Appropriate oil maintenance measures or oil changes can now be carried out even earlier and, above all, large hydraulic systems and circulation systems can be protected against malfunctions caused by free water.

Oils used for lubrication, pressure transmission or insulation should contain as little water as possible. But fresh oils always contain a small proportion of water. This water is dissolved in the oil. The proportion depends mainly on the base oil type and the additive. The relative humidity percentage indicates the concentration of water dissolved in the oil. Depending on the temperature, the oil cannot "carry" any more water if the concentration is above 100% relative humidity or if the water saturation point is reached. At this point, fine water droplets usually form and the oil becomes cloudy. If the proportion of these droplets is too high, free water settles in the form of a clearly visible phase separation, particularly during the cooling process. At a relative humidity of over 100 %, abrasive wear can occur at moving friction points. Where water is deposited instead of oil, the extremities of the surfaces are no longer lubricated. Water can cause massive corrosion and rust formation. OELCHECK uses the Karl Fischer method to measure all the water present in the oil, i.e. dissolved and free amounts, in ppm. This absolute water content does not indicate the relative humidity and thus not how much water is dissolved in the oil or how much water the oil could absorb before it separates. But knowing the relative humidity relative to the total water present in ppm is particularly important for oil fills in large hydraulic systems, in transformers or in circulation systems where water poses a risk, such as the paper industry or cold rolling mills, but also in systems with condensation. 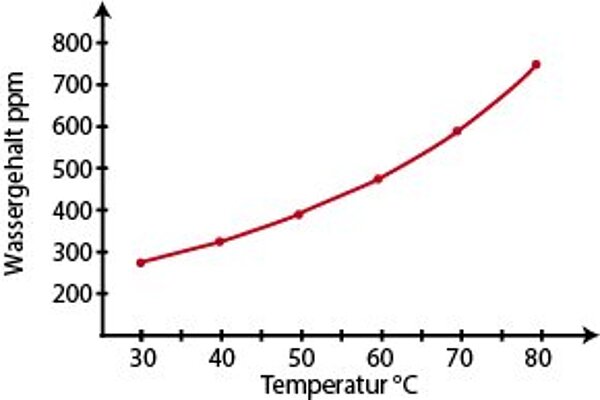 The relative humidity depends on the base oil type, viscosity and additives in the oil. It also changes depending on temperature, oil ageing and humidity. Oils dissolve significantly less water at low temperatures than at high temperatures. As an oil cools down, it releases more water than at its previous operating temperature. As the temperature changes, so does the water saturation point of an oil.

In many systems, online sensors continuously measure the relative humidity and temperature of the oil. However, their measurements do not predict how the relative humidity and saturation limit react when temperatures change or even how high the total water content is. But it is precisely this knowledge that is important so that appropriate measures can be taken in good time, in order to protect the systems from malfunctions caused by free water.

The creation of a water saturation curve requires the determination of the absolute water content in ppm using the Karl Fischer method. Water saturation is determined analogously with this value and from the relative humidity measured at a wide range of temperatures. On this basis, OELCHECK creates the corresponding water saturation curve, a new maintenance tool.

A practical example: The oil circulation system of a paper machine is filled with 5,000 litres of CLP 100. The typical water saturation in such a system is usually approx. 90%.

For the 5,000 litres in the paper machine, this would mean that approximately three litres of free water could separate from the oil during the cooling phase from 70 °C to 25 °C.
This free water should be continuously removed during the cooling phase. Without knowledge of the water saturation curve, it would not be possible to calculate or estimate the released water content.

Conclusion
With the new water saturation curve, proactive maintenance with water removal methods can take counteractive measures sooner – before the water saturation limit of an oil is exceeded and water is released at standstill. Using the saturation process, checking the oil fill depending on the temperature is significantly simplified. It becomes clear whether oil maintenance measures, drying or even an oil change are necessary or whether, for example, the oil should not fall below certain standstill temperatures.