Fuels consist of hydrocarbons with different "chain length". A diesel fuel, for example, consists of 200 to 2000 individual components in varying concentrations. Some of these compounds vaporize at low temperatures, some only at over 200°C. The boiling point of a fuel mixture is usually determined by distillation at room temperature (DIN EN ISO 3405, ASTM D86). However, the evaporation process can also be simulated as a distillation with a gas chromatograph (DIN EN ISO 3924). In this case, the boiling process is shown with boiling start and boiling end. The advantages of the GC method are obvious: on the one hand, the procedure is much faster, and on the other hand, a much smaller sample volume (3 ml vs. 100 ml) is required. The determination on the gas chromatograph is fully correlated to the "classical" distillation.

The distillation curve clearly shows whether a fuel sample is diesel, biodiesel or gasoline, for example. Incorrect fuel or contamination of gasoline with diesel, diesel with biodiesel, diesel with gasoline, etc. can also be clearly shown. Mixing of conventional fuels with vegetable oil is also visible, but this can also be detected using other test methods, such as viscosity change or FT-IR spectroscopy.

The respective standard specifies characteristic values for the fuel types for this purpose. For gasoline, for example, DIN EN 228 defines the amount of fuel evaporated at 70, 100 and 150°C as well as the final boiling point (FBP).  For diesel fuels according to DIN EN 590, the evaporated quantity at 250 °C and at 350 °C as well as the temperatures at which 10%, 50%, 90% and 95% of the fuel quantity evaporated are of interest. The measured values are decisive for the mixture formation and thus the engine behavior of the fuel (e.g. cetane index for diesel fuel).

“Boiling gaps" occurring in the distillation process are responsible, for example, for poor ignition characteristics in diesel. Furthermore, a high proportion of so-called high boilers is typically responsible for engine oil dilution via blow-by. Delayed mixture formation and blow-by of these components leads to increased interaction of these compounds with the cylinder wall. In some engines, cylinder liner varnish can also result from such effects. Thus, a bad fuel not only has a direct influence on the power development of the engine, but also on the oil quality and the wear behavior!

Simulated distillation is also used to determine the boiling point of crude oil products such as base oils or crude oils (DIN EN 15199-1, -2, -3). 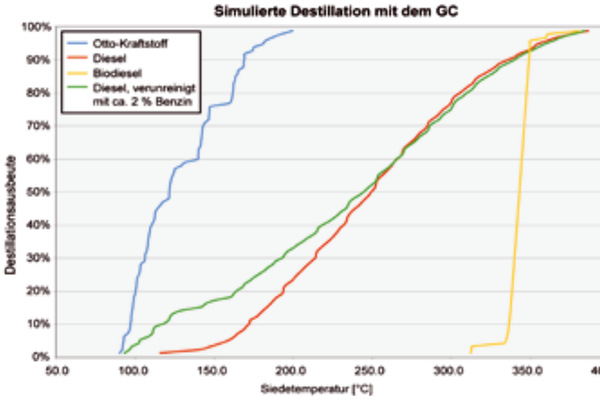