Standard for AN (Acid Number)

With very few exceptions, mineral oil-based or synthetic base oils are neutral, i.e. they have a pH value which is around 7 on a scale of 0 (extremely acidic) to 14 (extremely alkaline). The pH value is nevertheless influenced by additives that are added to the base oil. Some combinations, such as anti-wear and anti-corrosion additives, have a slightly acidic reaction. The acidic compound content of the oil also continues to increase during practical use, for example as a result of oxidation. The longer an oil is in use, the higher the operating temperatures, while the greater the number of contaminants in the oil, the more the level of acid-forming oil oxidation rises. An accumulation of acids in the oil accelerates oxidation and can increase the oil‘s viscosity. In extreme cases, oil that has become too thick is no longer conveyed in sufficient quantities to the lubrication point. If free acids are present and the corrosion inhibitors are used up, this can lead to the corrosion of all oil-covered surfaces. 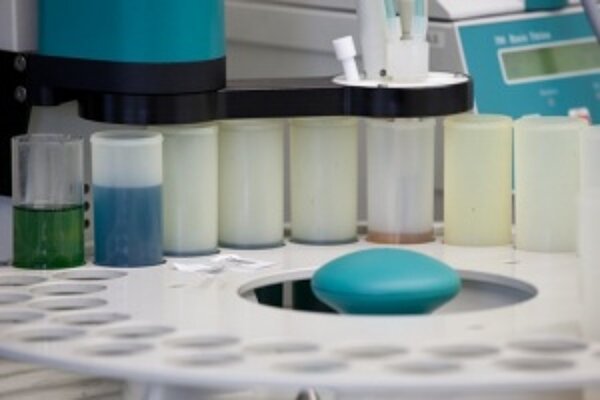 Determining the acid component is an important parameter in assessing all types of waste oils. Although different analytical methods have been established according to the type of oil involved, the determination procedure is always largely the same. A lubricant oil sample weighing between 2 and 20 g (according to the expected result) is intensively agitated with a solvent mixture containing a very small quantity of water. Acid components from the oil are transferred into the water during this process, which is necessary because the acids cannot be detected directly in the oil itself; it has to be detected in this „aqueous phase“ by means of titration. Used as a strong base, potassium hydroxide (KOH) is added to the sample one drop at a time until the oil becomes „neutral“. When all of the acids have been neutralised by the potassium hydroxide, the next drop of base added causes a sudden increase in the pH value. The acid content of the sample can then be calculated from the KOH consumed up to this „transition point“ and stated in mgKOH/g of oil. NN (Neutralisation Number) and AN (Acid Number) are determined using the same principle. When determining the NN, a colour indicator is added to the water-solvent mixture which changes colour exactly at the transition point - a change that the laboratory technician is trained to recognise. The AN, which requires more resources to determine, is usually obtained only if a sample is too dark for the transition point to be observed. The sample is agitated with the same solvent used to determine the NN, only minus the indicator. The titrant (KOH) is then added – usually automatically – in small steps with a burette until an electrode that continuously registers the pH value indicates the transition point. The KOH used up to this point is indicated as the AN in mgKOH/g. Not every titration curve runs in a way that allows an unambiguous transition point to be defined, however. To ensure that the acid component in the oil can still be determined in spite of this, the AN is obtained by titrating the titration up to a potential that has previously been measured in an alkaline buffer. For many years, under the „old“ AN determination procedure (ASTM D664) this titration was carried out to a pH value of 11 (-240 mV). Under the ASTM D664 standard that applies today, however, titration is only carried out up to a „buffer“, or a pH value of 10 (-180 mV). This change in the standard means that KOH consumption is lower, with pH 10 having to be achieved instead of the previous 11. It also means that the AN value provided in OELCHECK lab reports has been systematically lower since the entry into force of the new AN standard than it was when pH 11 was the buffer (as trend analyses in particular reveal).

This is because the formula for obtaining the AN is as follows:

When the ASTM standard was first formulated, the buffer solutions used were organic. At the time the change to aqueous buffers was made, pH 11 was chosen as the buffer because the results obtained with pH 11 were the closest to the initial standard. With the latest automatic analysers, however, it turned out that using pH 11 as the buffer systematically resulted in the value measured being too high. Based on the results of the comparative tests, the standards committee – of which OELCHECK is a member – therefore decided to reduce the buffer to pH 10, as this was found to deliver significantly more stable and comparable results. In addition to this buffer, another buffer is defined at pH 4 (180 mV). Measurement of the KOH consumed to this pH 4 point enables the SAN (Strong Acid Number) to be calculated and given in mgKOH/g. The SAN only reveals the highly aggressive acids that exist at a pH value below 4. The discovery in used gas engine oil of acids of this kind, which are usually found in landfill gas and the like, means that an immediate oil change is required.

The comparability of AN values

When observing trend analyses, it is noticeable that from 2019, lower AN values are reported in your laboratory reports. This is not a mistake on the part of the lab. As the „old“ AN values were determined using the pH 11 buffer, they cannot be compared with the values calculated since the introduction of the „new“ standard that uses the pH 10 buffer. Unfortunately, there is no conversion factor that could provide clarification in this regard, either. OELCHECK does, however, offer its customers the option of requesting the „old“ value on demand, which we continue to determine together with the „new“ one. In this way, we can – in spite of the new standard – still refer back to these „old“ values if in doubt.

Storage and handling of lubricants