The shear viscosity of greases

Every grease changes during use. It becomes softer or harder, depending on load and thickener. However, a solid or softened used grease can be dangerous for the lubricated element. This is why we determine penetration as part of the all-inclusive analysis kit 5. It provides information about this change and also enables the grease to be assigned to the NLGI consistency class. A change compared to fresh grease informs you, among other things, whether the grease can still be distributed well in a bearing or whether it has softened to such an extent that it bleeds out. To determine the unworked penetration, 3 ml of used grease is poured into a pot. A special cone is placed on its surface. Its penetration depth into the grease is measured after 5 seconds in 0.1 mm and specified as penetration. 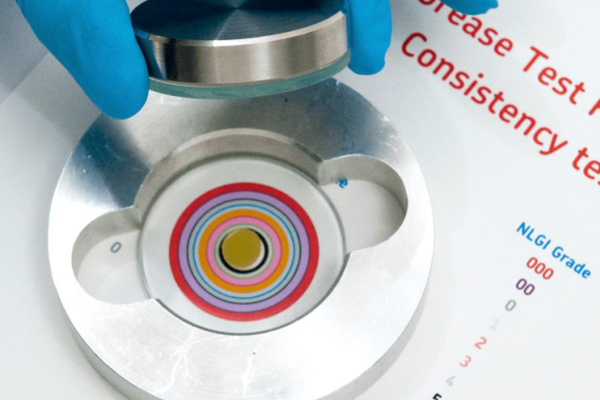 An OELCHECK grease sampling hose holds 9 ml, a sufficient amount of grease for all tests. Especially in bearings with low grease filling, the amount required for penetration measurement is sometimes not available because the grease has already been consumed for the other analyses. In these cases, a rheometer (rotational viscometer) is used. It measures the change in “dynamic viscosity” or shear viscosity based on 1.5 ml of grease. This allows information about the change in penetration to be obtained indirectly.

During the analysis, a grease blob is applied to a lower plate with a diameter of approx. 3 cm. An upper plate of equal size is lowered to 1 mm from the lower plate and then rotated. This simulates the behaviour of the grease in the lubrication gap in a practically-oriented manner.
The resistance between the upper and lower plates can be measured as dynamic viscosity in Pa·s (Pascal seconds) and specified as shear viscosity for lubricating greases. The velocity gradient between the plates is given as the shear rate in 1/s. The percentage change is calculated as a “relative viscosity change” of the shear viscosity with known fresh grease. The changes allow conclusions to be drawn as to how strongly the grease can still resist the effect of shear forces in comparison with fresh grease.

On the basis of the absolute value of the shear viscosity as well as the percentage viscosity loss, the tribologist assessing your grease sample at OELCHECK can derive whether the thickener can still transfer sufficient lubricating oil to the friction point under load. Relubrication intervals can also be defined by assessing whether the grease has already become so “thin” due to shearing of the grease structure that it runs out of the bearing and should therefore be refilled more frequently.
However, not only the fresh grease values are used to evaluate the sample. A comparison with the results of previous trend analyses is also carried out, taking into account the individual characteristics of the grease and any relubrication quantities.

An increase in apparent viscosity can mean that the grease no longer supplies enough oil to the lubrication point. There are several possible causes for this:

As a general rule of thumb: from a relative viscosity loss of 7.5 %, relubrication must be carried out soon; it must be performed immediately as from 10 %.

Shear viscosity and relative viscosity loss depend on the properties of the grease. It consists of approximately 90 % base oil and additives and approximately 10 % thickener. The latter holds the base oil and additives with its sponge-like structure and slowly releases them into the lubrication point during use. Modern complex greases (with complex soap thickener based on lithium, calcium, aluminium) and gel greases (with non-soap thickener) behave differently to conventional multi-purpose greases with their simple soap structure. The modern grease types have a particularly fine-pored thickener structure, which makes the oil output finer and more even. The viscosity change of these greases is around 1 % when fresh. In contrast, the value is around 4 % for conventional multi-purpose greases with a simple soap structure.

Each grease behaves individually in use. If a new product needs to be selected for a specific application and/or its relubrication intervals need to be optimised, the shear viscosity and relative viscosity loss should therefore be determined under practically-based conditions with the aid of trend analyses in the OELCHECK laboratory, especially in the case of complex and gel greases. We compare the used grease values with the fresh grease values. The specifications from data sheets as well as the technical data determined by us are contained in the large OELCHECK fresh grease database for almost all available lubricating greases. Only in exceptional cases do we also need a sample of the fresh grease from you to assess the shear viscosity.

Top tip: More information on possible analyses for lubricating greases can be found in:

Why do you not indicate any "limit values" in your laboratory reports?