During the analysis of oil samples from engines or from gears and systems with an attached oil cooler, besides water, any ethylene glycol content is also an important parameter. Ultimately, in addition to water and anti-corrosion additives, ethylene glycol is a significant component of a coolant. The proportion of glycol and oil thus becomes an important indicator as to whether coolant is penetrating the oil circuit. Water which, in addition to the additives and glycol, gets into the oil can volatilise during normal operation or be baked out of the oil on account of its lower boiling point. In addition, water not only points to leakages in the cooling circuit, it can also get into the oil e.g. through condensation.

On the basis of the glycol content, it is nevertheless easy to understand whether in combustion engines, e.g. a cylinder head gasket is defective or whether the copper tubing in a gear cooler is corroded through.

In addition to the determination of the elements boron, sodium and potassium, to date, the glycol content has been exclusively determined from the FT-IR spectrum. The IR method nevertheless has some disadvantages for investigating glycol. The corresponding absorption band is not very pronounced. In the interaction with other ageing processes, it is frequently displaced. Glycol may thus only be defined with FT infrared spectroscopy above concentrations of 0.08%, with a highly inaccurate quantitative specification and where appropriate, must be estimated via additives. With the newly introduced headspace gas chromatography (HS-GC), there is now an additional selective process in the OELCHECK laboratory for the definition of free ethylene glycol. In this way, glycol is already demonstrable at significantly lower concentrations with a high degree of precision. In the first step of the investigation in the head space gas chromatograph, the oil is heated in a tightly sealed glass vessel to 120°C. The volatile components, including ethylene glycol, vaporise; the oil remains in the liquid phase. In the second step, a specimen is extracted from the vapour space via a hollow needle and transferred to the gas chromatograph. All of the components contained in the steam are separated by their boiling points. The ethylene glycol is detected during the data output as an individual „peak“.

The investigation with the head space gas chromatograph is a component of the OELCHECK analysis set 5 for engines which are operated with petrol, diesel or plant fuels. It is also available as a supplementary individual test. In the laboratory report, the „GC glycol content in %“ is indicated in the „contamination“ column. 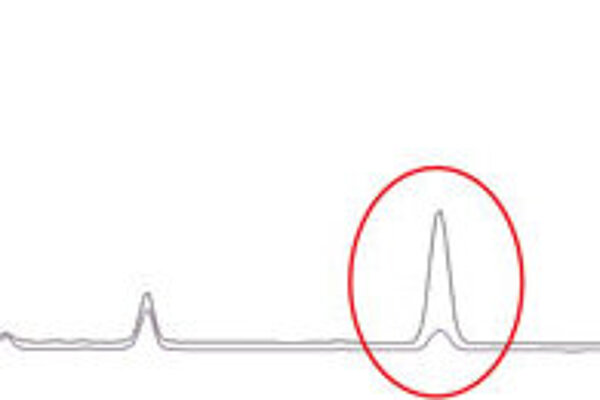