The drop point – an important parameter for lubricating greases

Machine elements are usually lubricated with a lubricating grease when a continuous supply of oil to the lubrication point is technically not feasible or only at great expense. If an oil would drip from the lubrication point or even run out and the moving parts would then run dry, a grease is used instead of the oil. It is very important that the grease does not "melt away" even at rising temperatures, but adheres to it!

Lubricating greases are not chemically pure substances. They consist of up to 95% base oils with additives. The base oil is embedded by the thickener, similar to a sponge, and thus prevented from running off. All types of mineral and synthetic oils with different additive compositions are used as base oils. So-called metallic soaps based on e.g. lithium, calcium, sodium or aluminum or combinations of these soaps are usually used as thickeners. The raw materials, which are actually powdery, form this "sponge-like" thickener structure in a cooking process. The oil added during grease boiling is absorbed and retained by the thickener so that it can then be released again at the lubrication point under defined conditions during use.

The drop point is determined mainly for fresh grease, but also for used grease (at least 3g of grease are necessary for the determination). These values are indicators for an identity check or allow an indication of whether a grease can meet the set requirements at all or at any point in time. 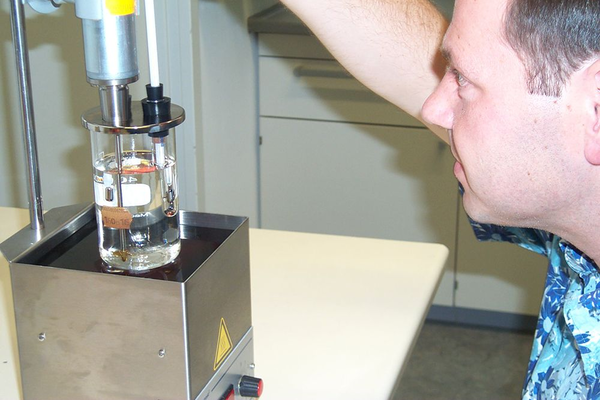 In the test, the end point of a softening process is determined under static conditions. For this purpose, a small amount of grease is filled into a nipple in which a thermometer is located. Now the fat is continuously heated until a drop forms at the lower opening of the nipple. This drop can be melted thickener soap or oil. The temperature at which the dripping begins is called the drop point. Heating of greases up to 300°C is no problem for today's drop point measuring instruments.

The upper temperature limit of a grease is determined, among other things, by the oxidation of the base oil and the destruction of the thickener, but not by the drop point. In practice, at the end of this process, there is a risk of the grease dripping from the lubrication point.

If the analysis of a used grease reveals a lower dropping point than that of the fresh grease, this may indicate two problems:

In both cases, a solution to the problem can only be achieved by replacing the existing grease or by increased relubrication with identical grease type at shorter intervals.