Lubricating greases are not chemically pure substances. They consist of up to 95% base oils with additives. The base oil is embedded by the thickener, similar to a sponge, and thus prevented from running off. All types of mineral and synthetic oils with different additive compositions are used as base oils. So-called metallic soaps based on e.g. lithium, calcium, sodium or aluminum or combinations of these soaps are usually used as thickeners. The raw materials, which are actually powdery, form this "sponge-like" thickener structure in a cooking process. The oil added during grease boiling is absorbed and retained by the thickener so that it can then be released again at the lubrication point under defined conditions during use.

Penetration is determined mainly for fresh grease, but also for used grease (at least 3g of grease are necessary for the determination). These values are indicators for an identity check or allow an indication of whether a grease can meet the set requirements at all or at any point in time. 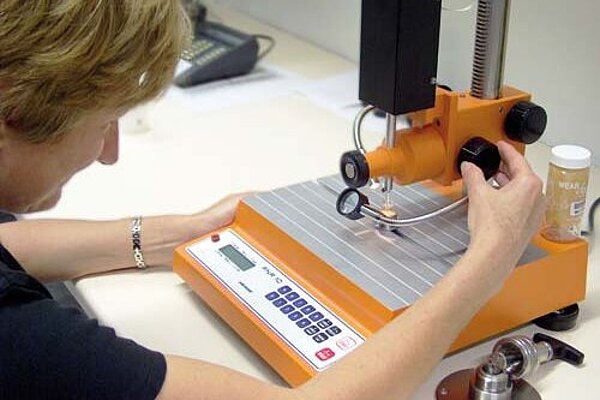 Just as viscosity describes the flowability of a lubricating oil or hydraulic fluid, (unworked) penetration or consistency characterizes the more or less high stiffness of a lubricating grease. The penetration of a grease is not directly related to the viscosity of its base oil or the type of thickener used. Depending on the amount of grease present, it is measured  in a penetrometer using a full or a quarter cone. For the determination according to DIN ISO 2137, the grease is filled into a standardized cup at room temperature (25°C). The tip of a standardized double cone touches the surface. After releasing the holding device, the cone has five seconds to penetrate the grease. Using a scale applied to the holding rod of the cone, this penetration depth is indicated in 0.1 mm increments. Penetration thus characterizes the deformability of the grease through a standardized, weight-loaded cone. The cone penetrates deeper into soft greases than into solid ones. For example, a value of 265 means that the standard cone sank 26.5 mm into the grease during the measurement.

The penetration number is the basis for specifying the consistency class. Thus, a grease into which the standard cone penetrates 26.5 to 29.5 mm corresponds to an NLGI class 2. Several decades ago, the NLGI, the National Lubricating Grease Institute of the USA, addressed technical requirements for greases and defined the following 9 NLGI classes based on cone penetration depth:

Greases of classes NLGI 0 to NLGI 000 are very soft to fluid (therefore also called semifluid greases), greases of class NLGI 6 are solid "block greases" similar to Palmin. However, the classes "4" to "6" are hardly ever encountered in practice today.

Consistency, more simple than penetration, indicates in terms of a single number whether the grease is more soft or firm. Typical multipurpose greases usually have a "2" in the product designation. If greases are to be easily conveyable with central lubrication systems, grease guns or special lubricators, "1" is often selected. If the grease is to adhere a little better or seal the lubrication point, an NLGI 3 grease is used. Gear liquid greases usually correspond to NLGI 00. The consistency of a grease, i.e. the indication of whether the same grease is softer or harder, therefore plays a decisive role in its selection.

The difference between unworked and worked penetration indicates the work stability and thus the resistance at which a grease softens too much and thus becomes unusable.

A higher penetration and thus a softer grease indicates mixing with another grease. This is because greases with different thickener types almost always become significantly softer when mixed, sometimes even soupy. Because the different soap types react with each other and become liquid, the base oil runs out. A higher penetration depth and thus lower consistence class also means that the grease has been sheared due to mechanical stresses in the bearing point and the soap structure has been largely destroyed. With lower penetration depth and thus lower penetration, the grease contains less base oil and more thickener than the fresh grease. This is the case, for example, if the base oil has "bled out" of the soap due to vibrations or has evaporated or oxidized strongly due to excessively high temperatures.