Reliable and rapid: this is what OELCHECK customers think of our analysis service. In order that we may continue to cope with the constantly increasing number of samples in the future, we have made provisions. The laboratory is equipped correspondingly if a device genuinely fails for several hours.

We have invested heavily in EDP, installed supplementary devices and in part, significantly optimised existing ones. Above all, this relates to: 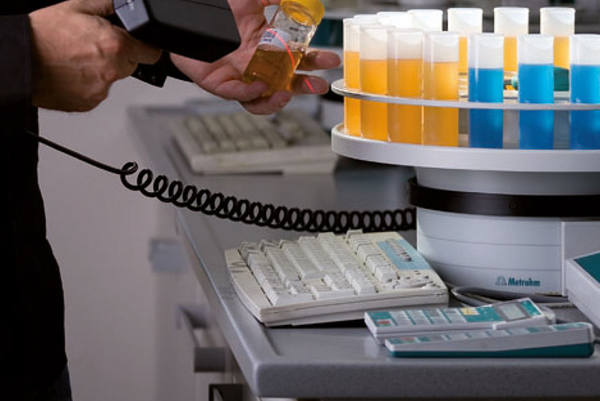 The following explanations show how systematically OELCHECK proceeds during the introduction of optimised techniques. We usually enter new territory here with the device supplier, since such optimisations cannot be bought off the peg. They have nevertheless guaranteed that to date, no increase in prices have been required since the introduction of the euro in 2002. In used oil analysis, atomic emission spectroscopy (AES) is the most widely used procedure. For this, OELCHECK deploys two Perkin Elmer ICP devices. These simultaneously determine 29 elements (additives, wear, impurities) with a high degree of precision within a broad concentration range for oil. In addition, through them, the monitoring of additive reduction can be carried out more precisely. The actual measuring time is brief. However, before every measurement, the entire system must be pre-rinsed with the oil of the following specimen and afterwards flushed with solvent. Only in this way have mixtures of samples and hence measuring errors been excluded. The time required for cleaning and rinsing was greater than for the measurement. The fitting of the ICP devices with the new ASXPress Plus provided a remedy. By virtue of a supplementary specimen loop and a 6-way valve in the sample feed, the execution of the three steps, pre-rinsing, measurement, rinsing is now overlapping. In this way, the processing time for a sample at an ICP is almost halved with the same precision. In addition, there are some positive aspects for the environment: by omitting the pre-rinsing, a smaller sample volume is required. And by virtue of the shortened analysis times, the energy and argon consumption of the ICP are considerably reduced.