Pirelli – millions of tyres made for China

Pirelli, one of the largest tyre manufacturers in the world is active in more than 160 countries and is of course also present in the growth market of China. In the Shandong province on the eastern coast of China near the city of Yanzhou, Pirelli operates two large plants for manufacturing tyres for heavy commercial vehicles and cars. The Chinese car market is growing rapidly. Pirelli is already aiming to produce 10 million car tyres in the next few years at its Yanzhou plant alone, one of the most modern tyre factories in the world.

Production runs seven days a week, around the clock. The demands placed on the employees and production facilities are correspondingly high. To counteract machine failures and unplanned downtime, the production facilities are monitored in the interests of proactive maintenance. OELCHECK lubricant analyses are  indispensable in this case. At the Yanzhou plant, they successfully prevented significant damage to a huge kneader, as well as to a hydraulic press for vulcanising tyre fabric.

From mixing the rubber to vulcanisation

The rubber mixture for a tyre is made up of around 30 different ingredients. Rubber, soot, bulking agents, oils and chemicals are kneaded together in a large Banbury mixer as if they were ingredients for dough. Both of the large rotating shafts mesh together like two large screws, producing a homogeneous mixture. The gearing system with driving power of more than 3,000 kW, which supplies both of the rotors with the energy for kneading, is put under tremendous mechanical strain when the tough block of rubber weighing over 50 kg is replaced. 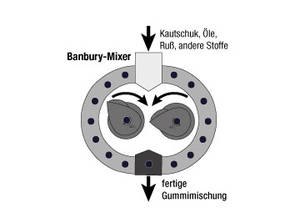 After mixing, the still-hot black rubber mass is extruded and, after a period of cooling, calendered. A special roller works a textile or wire mesh into the rubber and brings it to the desired strength. After tailoring, the individual layers of fabric of the tyre are brought together in a tyre production machine. Finally, the individual layers are joined together in a heat press. The blank tyre is then vulcanised in heating moulds at over 150 degrees celsius for several minutes depending on its size. This gives the tyre its final shape, its profile and the markings on the sides.

During trend analyses from over 60 mixers and presses which Pirelli carried out in April 2014, the lab report gave a red light twice! Red exclamation marks in the lab report concerning the gear oil from a stamp kneader as well as the hydraulic oil from a press prompted Pirelli Yanzhou to act.
The gear system, which is filled with 750 litres of CLP 320 industrial gear oil, powers the Banbury mixer‘s kneading rollers at the start of the production process. If the mixer fails, no raw materials are available to produce tyres. But almost everything was wrong with the gear oil. Even with the naked eye, large wear particles were visible. With a value of over 300, the PQ index was extremely high and warned against gear damage, because a high PQ index generally indicates severe wear processes progressing rapidly, regardless of the iron value in mg/kg. The AN (acid number) was also raised significantly, and the gear oil showed signs of being burdened and oxidised by the acids in keeping with this.
In his report, the experienced OELCHECK tribologist recommended an inspection of the gearing and that the oil be changed immediately. The gear oil was promptly replaced by the maintenance team at the Pirelli plant in Yanzhou, but due to the favourable situation in terms of incoming orders, the Banbury mixer could not be switched off straight away. It was not until three months later during the next scheduled downtime that the gears were inspected and the damage which OELCHECK predicted was verified.

The constant overloading of the gears had taken its toll. But thanks to the early warning from the OELCHECK laboratory, the repairs could take place during regular maintenance. Sudden failure and unplanned downtime was avoided.

The mixer‘s gears were able to be protected from heavy damage, just like the hydraulic system of a steam-heated heat press which carried out vulcanisation of the rubber. Its 750 litres of hydraulic oil were dangerously contaminated with particles of dirt and moisture. Warned by the experienced OELCHECK tribologists, the maintenance team quickly found the cause on site. A seal on the pressure cylinder was found to be faulty and quickly replaced. The hydraulic oil was saved too. After cleaning and bypass filtration by our partner Runce, it is now back in use.